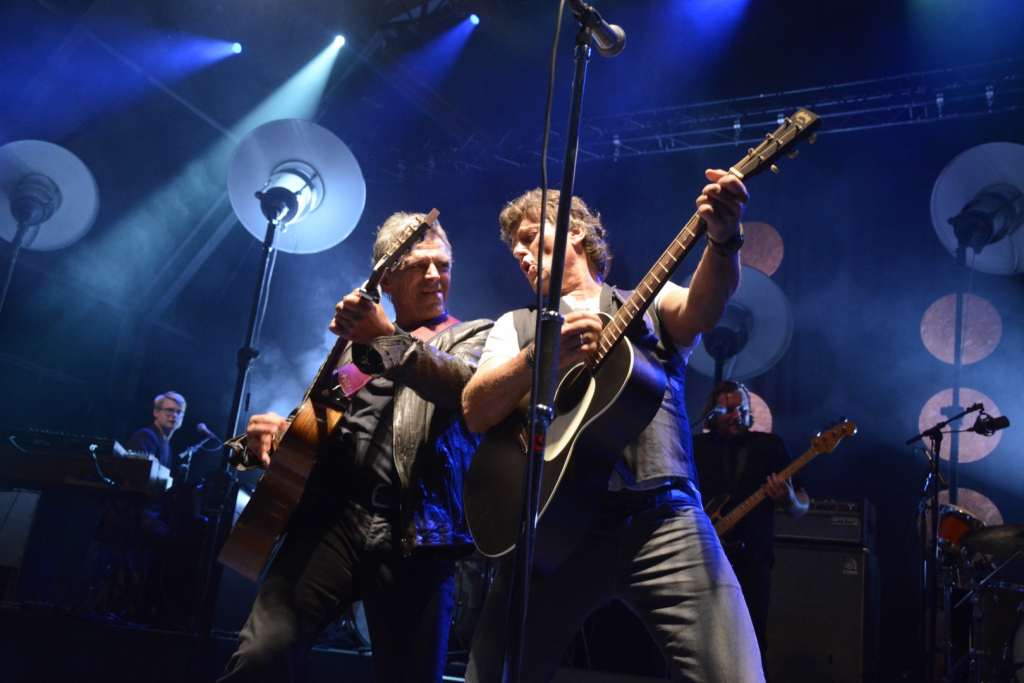 My very first impression of Samsø was to be warned off it. My grandfather, who was from Rude Mark on the Jutland side of the island, would not allow my girlfriend and I to go to Samsø on a bicycle ride. ”People from Samsø are rascals!” he said in a dramatic tone of voice. It turns out that a man from Samsø had once taken him for a ride in a potato deal. We didn’t heed his advice though and we went over to the sunshine island.

We came back to the island when our first child was six months old. We stayed in a boarding house in Ballen but had to move on after three days as our baby girl was teething so much that we worried we were keeping all the other guests awake.

I have frequently played at the festival, with pretty much all the bands I have been in, including MALURT, as well as with Nye Rejsende, Boat Man Love, THE BAND, as Poul Krebs’ guest, and even solo several times. It has been a delight watching my daughter Mathilde take to the festival enjoying some amazing experiences of her own. KrebsFalch and their band took a break in July 2016, so we didn’t go to the festival, but we are currently reviving our band in 2017, with the aim to perform at the Samsø festival once more.

I have a very special relationship with Brundby Rockhotel where I have been rehearsed and performed on stage many times, even with my children! Mathilde and her husband Jesper even got married on Samsø, and we celebrated their wedding in fine style, in Brundby.

This is where we also celebrated with ShowStars, the football project we succeeded in getting to Samsø as part of a film shoot for ”Rejseholdet”. Poul Krebs and I played songs at the stadium in Tranebjerg before changing clothes and going for it in the football match. I believe Poul missed a penalty kick and Flemming Povlsen scored with an overhead kick. I don’t think I really had any impact until we got to the party!

Poul owns a house on Samsø, which he has had for many years. I have been there many times, as well as his studio in Dansebjerget.

About Michael Falch
• With different bands, Michael made hits like ” I et land uden høje bjerge”, ”Mød mig i mørket” and ”Binder mig aldrig igen”.
• Has performed in several films and plays.
• In 1987, he was awarded a Bodil as the year’s best male in a leading role for his performance in ”Mord i Mørket.”
• At The Danish Music Awards 2014, Michael was awarded a Grammy for ”Danish Adult Album of the Year (Voxpop).”

Kirsten Bundgaard and Mads Holmen Andersen, with their home port in Nappedam, often visit a harbour…

During the past decade Samsø has built up an impressive range of restaurants. They all have in commo…

A few months ago, the red carpet was once again rolled out. Her Royal Highness Princess Isabella and…

For Maria Louise and Dennis, everyday life was suffocating them. Therefore they moved to Samsø to re…

Ellen Lynard enters the bright foyer with the round tables from the darkness of the cinema. She stra…

Most of us look forward to that part of our holiday where we are lying on our backs doing nothing. T…

Samsø - My Island, Samsø for Adults

Even before we could sing along to songs like ”Symptom Of My Time”, ”Save A Little Love” and ”Right…