“Men are like wine, age souring the bad and bettering the good”. Although these words were written by Cicero, a roman philosopher more than 2,000 years ago, they might as well be the slogan for the small group of men who call themselves the Samsø Wine Syndicate.

‘Hygge’ in your glass
This initiative was started 10 years ago by 11 men from Samsø. They founded a club where they could share their passion for wine. They tasted many different wines, learnt about tasting and techniques for enjoying different wines, while sharing many tall stories. Then, on a study trip to Alsace, the dream of starting their own vineyard was hatched.

“From the outset we were planning to make enough wine to be able to sell it. So we started by planting 1,500-1,600 plants. Most of us were retired by then, so we didn’t need to make a living out of it. It was just a hobby and we wanted to have fun doing it. This is something we still aim for”, Hardy Thomsen explains. He is in charge of sales.

Growing and making wine is particularly time consuming. It is said that each and every vine takes a whole hour’s work over the course of one year, particularly during the period from 15 May to 15 July when the plants are growing 5-10cm each day.

From grape to drops
The vines are predominantly of the Rondo and Solaris varietals which are particularly suitable for Nordic climes. However, they also experiment with Gewürtztraminer, Cabernet Curtis and Pinot Noir. The syndicate makes both white, red and rose wines, the latest addition being the exclusive “Cartello”, matured in French oak barrels. But strictly no drops until the harvest is in!

Stig and Mads enjoy lively conversations; Stig is 80 and the oldest of them all, Mads at 34 is the youngest. “The social aspect of enjoying and appreciating wine is an important part of our group and the age differences are not an issue”, say Mads as he harvests one bunch of ripe grapes after another from the vines.

The grapes are taken to the nearest winery where they are pressed shortly after being harvested. “The harvest is quite a celebration when we are rewarded after the many hours we have spent in the vineyard over the year. But it’s also a serious, crucial time when we decide how to create the wines, based on the balance of sweet and sour grapes. We have to decide quite quickly and there is no going back”, so Stig explains. He and two other men are in charge of creating the wines.

The white wine arrives in the shops after being stored in steel barrels for around 7 months. A little while later the rose is released to the shops, and finally the red wine, which can only be enjoyed towards the end of June. “In the last couple of years, we have sold out more or less by September, but we don’t have any plans to expand. Instead, we aim to improve all the time, while getting as much enjoyment out of it as possible. We are doing quite well on both fronts”, so says Hardy, the head of sales. 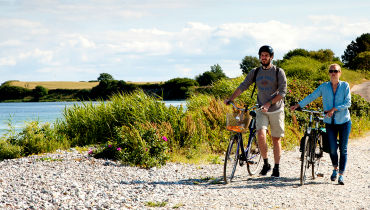