When the Vikings came

In 2012 the mini-festival “Samsø in the Viking Age” was held in Langør. More than 4.200 people from near and far attended the festival, and a handful of those came from River Cottage in England. Programme host Steve Lamb, forager John Wright and chef Gill Meller fell in love with the islanders’ hospitality and with the many high quality ingredients which they found in the wild and at the farms they visited.

During one morning on Samsø I have found about 40 different edible plants, for example wild thyme, elder flowers and seaweed.
John Wright, forager at River Cottage

The culmination of the festival was a Viking Feast made in cooperation with the River Cottage, a team of local chefs and part of the crew of the Sea Stallion from Glendalough. The Sea Stallion is one of the world’s largest Viking ships that normally has its home at the Roskilde Viking Ship Museum.

The head chef that day was Kasper Gaard, who normally runs the kitchen at the local hotel and restaurant, Ilse made. Kasper made such a good impression on the British that he was invited to participate in a handful of River Cottages programmes.

Samsø is a great island with a beautiful landscape and a wealth of good ingredients.
Steve Lamb, programme host at River Cottage

At the end of July in 2013 River Cottage came back to Samsø again, and this time host Hugh Fearnley- Whittingstall came along. Prior to the visit Hugh stayed one day in Copenhagen, where he made Danish pastry with chef Claus Meyer and met the head chef of noma, René Redzepi. Hugh was on a quest to find the Danish food culture. Beeing the theme in a number of new programmes about Scandinavia.

Hugh and the crew spent the day on Samsø finding herbs, vegetables and a Gute lamb for a feast served in Ilse mades cozy garden. ”Hugh was very impressed with the large supply of quality ingredients that we have on Samsø,” says Kasper. ”We also have a way of composing and using the ingredients which are not very common in England.”

Tender meat from a tough animal

The Gute lamb was one of the highlights a the feast. This special Viking breed, originally from Gotland in Sweden, is part of the nature restoration plan on Samsø. The Gute sheeps keep unwanted plants such as hawthorn, rosehips, sloes and blackberries down. Their diverse diet forms the delicate slightly dark meat. ”It is fantastic that such tough animals develop so tender and tasty meat,” was Hugh´s words, when he tasted the roast.

River Cottage is also very interested in renewable energy, and during their stay they went for a trip up in a wind turbine and had a chat with Søren Hermansen Director at Samsø Energy Academy. 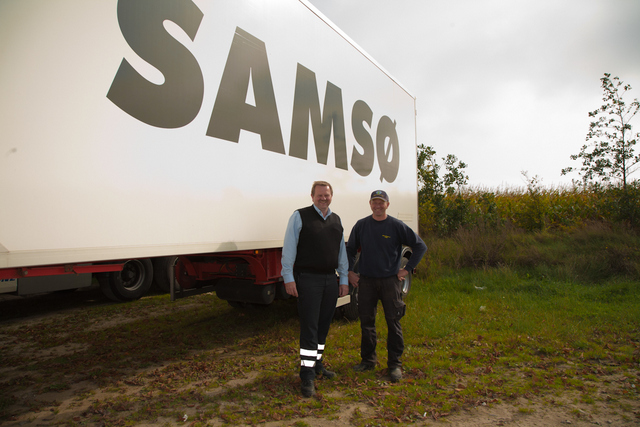