On a holiday to Greece and under a full moon, Henrik Kjærgaard proposed to Dorthe Svinth. “However, I did not go down on one knee as I am not 25 years old anymore. I wouldn’t necessarily have been able to get up again,” laughs Henrik. Dorthe said “yes”, and the wedding planning began.

“Samsø is a popular place to get married, so one has to book early. We started the process a year ahead and were actually quite surprised that the church was already busy. Fortunately, the vicar was very flexible, so we ended up getting both the church and the vicar on our preferred date,” says Dorthe.

Terrific in four layer
The bride and groom met each other at the Samsø Festival 10 years ago. Dorthe was at the festival with a friend and Henrik was there with a friend of Dorthe’s cousin. It was Henrik’s first visit to Samsø. One late evening he had to cycle to Ørby. “Do you realise how dark it is on Samsø? You’ll end up in the ditch without lights,” warned Dorthe. Henrik borrowed Dorthe’s bicycle lights and it is safe to say that the light in his heart also turned on that night.

Henrik and Dorthe were married on Samsø 29 August 2020 at 4 pm. The wedding ceremony took place in Nordby Church, and the party was held at Flinchs Hotel. Samsø was chosen because the couple has a close relationship with the island. Dorthe in particular has a long-standing love affair with Samsø: “I’ve come here ever since before I was born. The first time I visited the island, I was in my mother’s womb. My family went on holiday here for many years and eventually bought a house in Brundby”. She herself has owned a house in Ballen for 20 years and several members of the family have settled on the island.

The couple chose Flinchs Hotel as the setting for their wedding weekend. The hotel was available exclusively to the couple’s guests and had exactly the facilities the couple was looking for. There was a long list of requirements for the wedding and the bride and groom had a good dialogue with Kenn, who runs the hotel, and with the hotel’s chef. “We had special requests for the menu and were greeted with hospitality, understanding and useful suggestions. We are quite fond of food as are our guests, which is why the menu was important. We asked for three small fish courses, a course of red meat with Samsø vegetables, lovely cheeses with homemade crispbread and finally our favourite rhubarb trifle. It was heavenly,” both Dorthe and Henrik recall. For Dorthe, the wedding cake was an important piece in the wedding puzzle and she had all her wishes fulfilled. “I wanted a fondant-free wedding cake with marzipan, nuts and berries. The hotel managed that too – in four layers. It was absolutely terrific in taste and presentation.”

Welcoming and festive
“We felt like we were part of the family at Flinchs Hotel. It was very welcoming and pleasant, with excellent food and wine and an excellent atmosphere. Our guests were like cows returning to grass in the spring when the live band started playing. We were probably all in need of a bit of partying in a period marked by Corona. Everything was handled with safety and distance, even on the dance floor. The dancing continued long into the night. The music stopped at 3am and within half an hour all were in bed. What a party,” Dorthe enthuses.

“It was as though we’d held the party at home. It was familiar and relaxing. Even Dorthe let go of her inner control freak and surrendered,” laughs Henrik. Dorthe laughs along but adds that planning and organisation is important – not least to the bride. “The bridal bouquet must be beautiful, the hair done up nicely, the bridesmaids in place, the dress perfect remembering something new, old and blue. And then there’s everything else – the church has to be decorated, transport arranged, the local wedding photographer booked, place cards created, not to mention the wedding cake, which I think many women find important,” Dorthe protests, revealing that she did not leave anything to chance.

Dorthe adds that they were greeted with so much kindness and flexibility.” Even the local gardener and florist, who made the most beautiful bridal bouquet, made sure to decorate the church and the tables for dinner, and coordinated with the hotel and the church without us having to worry about it.” The newlyweds are more than satisfied reflecting on their successful wedding on Samsø.

Samsø has it all
Dorthe encourages everyone who is getting married or having a big party to go to Samsø: “It is beautiful here, the setting is perfect and you can find a level that suits your budget and your style. Once the guests have arrived, they stay for at least one night which adds a wonderful dimension to the party. Samsø can provide for all prices and all types, regardless of whether you want to get married in a church or barefoot in the hills.”

Even a bachelor or hen party can be arranged on Samsø. Henrik was surprised by a group of friends when he had arrived on the island for a weekend visit. The group was taken to the golf course in Besser in a hired bus. Following a round of golf, they continued to a wonderful champagne tasting in Den Gamle Købmandsgård in Ballen and afterwards a delicious dinner awaited them at Restaurant Skipperly.

Samsø in the crystal ball
The couple lives in the centre of Copenhagen. They dream of moving to Samsø later in life. Dorthe feels lucky to have met a man who, like her, shares a love of Samsø.“ I brought Samsø and Henrik brought his two daughters into the relationship. I love his daughters and his daughters love Samsø, so everything has worked out beautifully”.

With the current work situation and with a daughter in high school, it is not realistic for the two to take up permanent residence on Samsø yet. But both of them see possibilities in eventually creating their own jobs and, through the large association life on the island, helping to make a difference for Samsø and those who live on the island.

Dorthe concludes: “Samsø is a wonderful place to have a party or a holiday. Samsø is something special, the island is a mental refuge and at the same time a breeding ground for initiatives and a wealth of ideas which is the basis for entrepreneurship. We’ll have to see what the future brings but it is certain to involve Samsø ”. 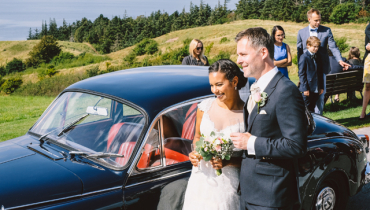 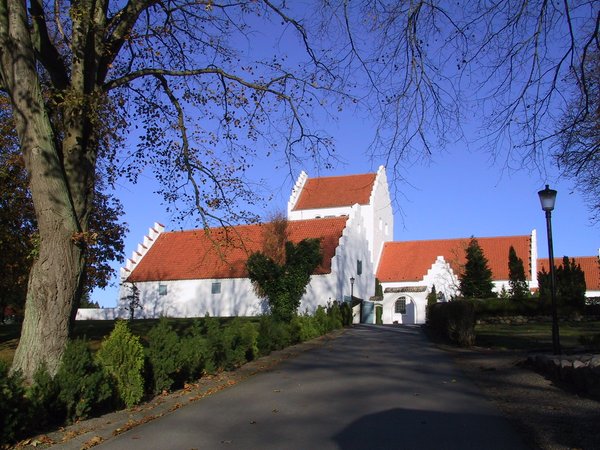 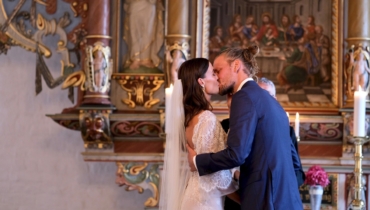 Planning a wedding requires complete control of seating plans and flowers, the dress, the church and… 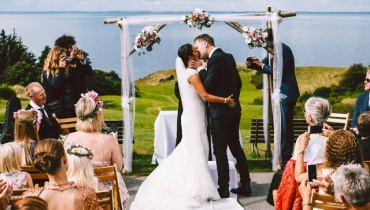 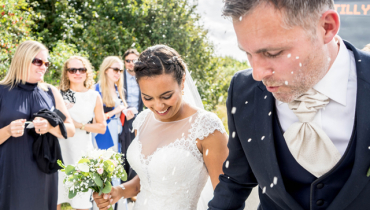