After passing Tranebjerg Church, turn left onto Marsk Stigsvej towards Pillemark. On the way to Pillemark, you will pass Samsø Skole (Samsø School) on your left and the castle mound on your right. In the Middle Ages, there was a castle here, which is believed to have been destroyed by the outlaw Marsk Stig. Make a right turn once you reach Pillemark and then an immediate left turn onto Tranemosevej towards Vesterløkken. Tranemosen spans 12 acres and is the home of rich and varied bird life. Drive towards the beach when you reach the end of Tranemosevej. The road ends in a dead-end with a car park. Around 500 metres to the south you will find Helligkilden.

The well gushes forth from an old hollow oak trunk on the beach. The well is connected to an old legend: A dead woman once drifted ashore here, and when they tried to take her dead body to the churches in Tranebjerg and Kolby, several horses simply could not carry it. However, when they turned the carriage towards Onsbjerg Churchyard two horses carried her dead body with ease.

Go back towards Tranemosevej, and then take the Vesterløkken road southwards. You will pass by a charming summerhouse area and the smallholding of Fredensdal, which now serves as a museum farm, showing us what a farm in the 1930s was like. If you need a break, Fredensdal is definitely worth a visit. Continue along Vestermarksvej towards Kolby Kås. Along the way, you will see the characteristic rows of gravel and sand, which were caused by glaciers from the Ice Age.

Swing by the harbour, which was a ferry harbour until recently. These days, it is only used by yachts and cargo ships. From Kolby Kås, take Kaasenvejen towards Kolby, along which you will pass Kolby Mill dating from 1859, which is open for visitors in the summer months. In Kolby you will find one of Samsø’s five Middle Age churches.

Drive along Kolby Hovedgade through Kolby and continue all the way to Vesborg Fyr (Vesborg Lighthouse). Once, the king Valdemar Atterdag’s large medieval castle was located here, and you can still see remnants of the ramparts and moat. In the small artillery house there is an exhibition about medieval Samsø. To give visitors the best insight, several photographs can be seen on the staircase leading up to the top of the lighthouse explaining what you can see from the top.

Both the exhibition and Vesborg Fyr are open from April to October. Remember to bring some cash with you if you want to go up the tower.

The tour now takes you through Kolby to Brattingsborg via a beautiful avenue lined by scattered burial mounds. The current Brattingsborg Estate was built in 1870. The estate was formerly called Søllemarksgård, named after an abandoned village in the area, but was then renamed by Griffenfeld. In 1677, Brattingsborg was inherited by the Danneskiold-Samsøe family who still live on the estate.

The former estate manager’s house, Ørnslund, is located at the turn of the road in the forest, and it is around here that several artificial “ancient” artefacts can be seen. They were produced during the Danish era of Romanticism when ancient stuff were in fashion. The former estate manager, August Kruse, who resided at Ørnslund until around 1880, built these memorial mounds and artificial rocks to highlight the area’s historical past. From Ørnslund, the road passes through the forest to the southern coast of Samsø. The forest is open to cars in May and October but the rest of the year, you can only walk and bike inside the forest. We recommend taking a walk from the car park near the beach to Lushage Fyr (Lushage Lighthouse) which is located a little to the east along the beach. On the road there, you will see a few low entrenchments from the English Wars in 1801-1814.

From the forest, take the second tree-lined road towards the former rural workers’ town of Ørby. Here, you can see the church, which dates from 1904. Once you reach Ørby, turn towards Nørreskifte, which is characterised by wide-open fields, but also has a new ferry harbour and Samsø Observatorium (Samsø Observatory). Follow the signs leading to Ballen.

Ballen used to have a steamer line to Copenhagen and Odense, and this was the origin of tourism on the island.

Amongst other people, Danish poet Holger Drachmann stayed at the  Købmandsgården (The Merchant Farm) with his wife Emmy.
Ballen soon became the refuge of prominent guests and a popular vacation spot that has held on to its reputation to this day.

As well as many stores, cafés, restaurants and hotels, Ballen has gorgeous beaches and a large marina where a ranger is available to help you with ideas for fun activities to do with the kids. Samsø Energiakademi (Samsø Energy Academy) is located on the nourthern outskirts of Ballen.

If you follow the path to the left of Restaurant Skipperly, you will reach a rarity, namely the limekiln that was built here in 1832. Coral limestone from Fakse was processed here so that it could be used for building purposes.

From Ballen you then take the road northwards to Brundby, which is dominated by the beautiful post mill from the 17th century. The mill is open to the public in the summer months. In Brundby, you can also swing by Denmark’s only Rock Hotel, which has hosted many concerts by famous musicians throughout the years.

The route is approx. 27 km Take this route if you want a relaxed tour of the South Island, along fie… 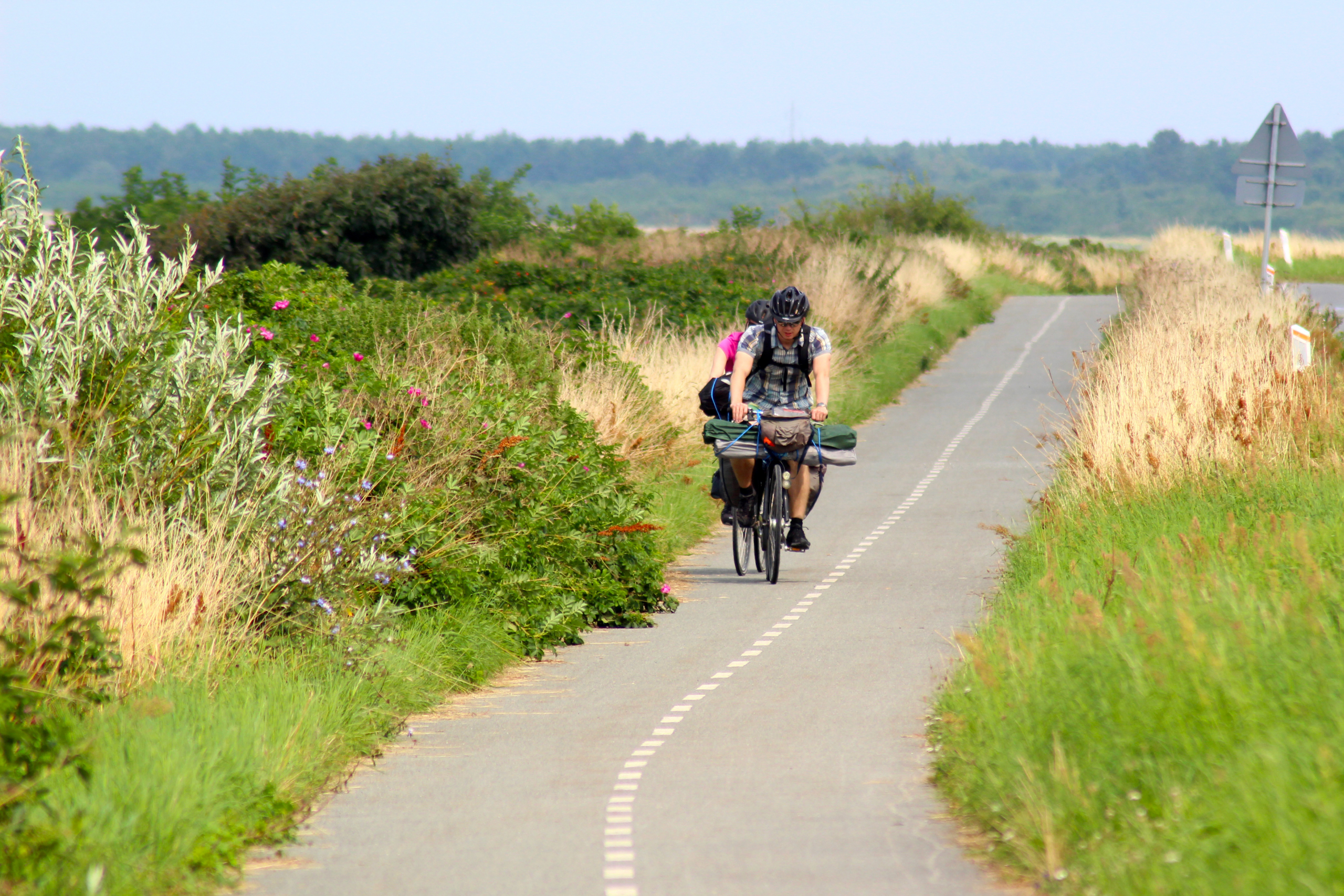 Follow the official regional cycling route and have a wonderful experience on South-Samsø. The regio…